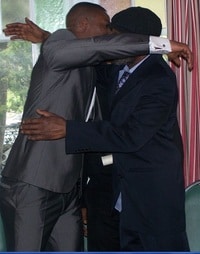 It’s been wrong from the very beginning. From as far back as I can remember I’ve been uncomfortable in myself, uncomfortable around life. My father wasn’t around and my mum was bringing up four of us by herself, she did her best, she’s a great mum but there were some things she just couldn’t do. I was the eldest of four kids.
I grew up on an estate where a lot of people seemed to get involved in crime.

I was frightened, I had no belief and I had no self-esteem. I looked to some of my peers and role models that were on the estate but a lot of them were not the sort you’d want to get involved with. They committed crime for whatever reason. I’m not judging them.

I think what happened for me was wanting to be liked and wanting to be accepted but the people I chose, that I wanted to be liked by, were in my immediate surroundings so I got exposed to a lot of stuff at a young age.

One of the first things I ever did was commit a burglary at a school that I had just left. A couple of young guys around my estate were saying “Are you coming?” and me saying “No” and them saying “You’re scared” which indicated that I wasn’t good enough, I wasn’t part of them. I wasn’t worthy because of that fear. I wanted to prove to them that I am worthy and worth liking.

Some of the role models and peers that I looked to were men that saw things in a certain way. Society owed them - victim mentality, they smoked weed. I wasn’t particularly interested in it but everyone was doing it so I said ok. I was accepted, we were all laughing, I was part of an ‘us’ and that was really important to me.

I did get a job aged about fifteen and a half, I’d just left school and got a job in a factory as a spot welder and saw another side of life - getting up early every day, being reliable. I’m saving money and giving money to my mum and leaning into manhood. After about nine months it fell through. I started to drink alcohol with my peers. I think the Monday morning after the Saturday drinking I’d be getting up late and I ended up getting laid off.

So I’ve started to commit crime and it all led to me getting my first custodial sentence. Prison was one of the most horrible experiences. Being away from my mum, my sisters, I missed them. I had to walk around with a kind of a cold attitude because of other people that were in there. I remember getting attacked and I had to bite somebody to save myself. They got me in the recess and I’m thinking to myself “What am I going to do? If they get me in the recess the officers can’t see anything.”
I’ve come out angry and I’ve committed more crime which led to more prison sentences, but somewhere along this stage I’m thinking “It’s not working, I’m going back to prison, I know this isn’t it”. So I’ve gone to college, I’ve got jobs which didn’t work out so then I’ve ended up back on the estate again and I’m angry, I’ve got all this thing going on around me of high unemployment of not giving people jobs and I’m somehow unconsciously buying into it. There’s no hope.

I still tried to persevere, I did labouring, I worked hard but all it did was build up my resentment and my anger about the people I was working for - how badly they were treating me. Things wouldn’t work out and somewhere along the line the drug situation started to change. It stopped from being drugs and alcohol to ‘A’ class. So it went beyond recreational and that’s when the problems started.

My addiction was swift and vicious but at the point I was in addiction I was in denial – “I can’t be addicted because I’m me! I’m cool and everybody’s doing it! I’m not addicted!” It was just too scary a concept to take on. It was a delusional space, a level of insanity.

Each time it really did hurt and I really did mean it when I said “I don’t want to do this again” but I didn’t understand addiction. I understood there was a bit of a problem and I needed help so I did rehabs, I did counselling, I did isolation and I always seemed to end up coming back to that space where I justified consuming a drug. You could almost give addiction an identity, another part of self that doesn’t want you to do well.

Eventually I got involved in committing a burglary where I cut my finger and left blood and DNA. I got stopped one day in my car and my feet haven’t touched the ground since. This sentence brought up so much pain. I was just looking at everything saying “Is this it?” I was aware that it was just stupid choices.

I went back about the business of rehabilitating myself, staying clean. I got detoxed off methadone, because by now I was taking heroin. That was a progression that really sneaked in under the radar in my addictive life. I did get lot of support from my RAPT worker, she seemed to understand my situation and gave me some contacts – Nehemiah house being one of them.

I sent an email via my RAPT worker to Nehemiah and one of the staff came to see me. It was unknown territory and I knew it was something that I had to do if I was going to change now forever. So I took the help and I came to Nehemiah and it began.

The first night I got here I saw the staff go home and my heart missed a beat and I thought “Oh my! I could just walk out the door and do what I want if I want to” but I didn’t I went upstairs.

One weekend there was a dawn raid by TNP staff doing random spot checks - breathalysers and urine tests. I felt my heart beating but thought “I haven’t taken any drugs or drunk any alcohol so why is my heart beating?” This was telling me “You can do it”. I went to bed with a smile on my face and when I woke up in the morning I still had a smile on my face!
The Nehemiah Project gives great potential for self-development because it’s make or break yourself right there and then and it’s not just the first day you get here, it’s every day you’re left with your own life in your own hands.
I’ve finally got my teeth into life and I now identify with the saying better late than never. My self esteem is back. I realize what I’ve got to be grateful for. It all contributes to the warm feeling I walk around with on a daily basis.

I hope to start a business, to help people that were in my position, support places like Nehemiah, that supported me when I needed help. The Nehemiah is the only thing that’s worked. I’m 49, I’ve been using drugs since the age of fourteen but now I have been fourteen months clean.
They say the best things in life are free - love, responsibility, reliability stuff like that and I’m living that now.

These cookies are used to deliver adverts more relevant to you and your interests They are also used to limit the number of times you see an advertisement as well as help measure the effectiveness of the advertising campaign. They are usually placed by advertising networks with the website operator’s permission. They remember that you have visited a website and this information is shared with other organisations such as advertisers. Quite often targeting or advertising cookies will be linked to site functionality provided by the other organisation.